TEACHERS
of
LIFE,
MUSIC
and
TABLA

I have been very fortunate to have studied  North Indian Tabla
with all of the gentlemen listed below at different phases of my livingness/beingness.
(1979 thru 1992)
I also studied ghatam and kanjira with John Bergamo

All have left an indelible impression on me as men, as musicians and as teachers.

I gratefully and humbly acknowledge each of them for  their compassion,
selflessness, and PATIENCE with me and profoundly apologize for any and all
of my inadequacies.

I first heard tabla on a record (black round thing with a hole in the middle)
called FESTIVALS FROM INDIA in 1974, there was a tabla solo on it by the great Alla Rakha,
and it was the first time that I had ever heard the instrument being recited and played.

This is pre-internet, dvd, cd technology) in EAST LA.

There was little to nothing on tabla in the library in  EAST LOS
so I went to the record store,
to the INTERNATIONAL MUSIC SECTION

WORLD MUSIC did not yet exist as a genre  - a record store is a building you
could actually walk into and see and hear records, read the liner notes,
buy the  record and take it home.
​
I removed the shrink wrap rather unceremoniously and put the record
on and and sat there fascinated by the SOUND's.

There are (still) not very musicians,
if any,
of India who make EAST LOS ANGELES
home,
i.e.,
no one to study or play with there.

So I went on a quest for (accredited) schools that taught tabla.
(Which was not considered the wisest career move by
my parents in 1975 while living in EAST Los Angeles)

My choices at the time were

UCLA
in California
went to UCLA to check it out
when I was there I was shown the CHICANO STUDIES DEPT office
which was being built,
which was a bathroom they were removing urinals from
i.e.,
I passed on UCLA,
but I would be hired by UCLA a few years later to play in their ensembles
and Airto asked me to sub for him for a couple of weeks.........


Wesleyan University
in Connecticut
too cold
too far
zero financial aid at that time
eventually did concerts there many years later with
Michael Pierre Vlatkovich - playing drumset
and with
L Shankar - playing tabla, ghatam, kanjira

ALI AKBAR COLLEGE OF MUSIC
in San Rafael , CA
too far
and no money to study OR live
and unaccredited at that time

CAL ARTS
in Valencia, CA, USA
called and spoke to a wonderful human being on the phone
named John Bergamo
knew nothing about John

it's 1977,
pre INTERNET
spoke to him and asked what I would need to do to audition
when I told him that I have never had a lesson in my life
i.e.,
my folks did not have money for that kind of thing
he asked what I played and how I had learned
he eventually asked me
"is there a junior college by you?"
Yes E L A C = EAST LA COLLEGE
he told me to go there and
TAKE EVERY MUSIC COURSE YOU POSSIBLY CAN
and see me in 1 year

which is what I did
​
BEYOND fortunate to receive a full scholarship to CAL ARTS* and study
with these wonderful teachers,
and be immersed into a universe I knew little to nothing about

but the scholarship did not cover housing or food of course,
so spent nights there where I could,
and survived on 8 pounds of raw chili per week, a dozen tortillas
and 1/2 gallon of juice......

One of the most interesting things about tabla is that it is an aural/oral tradition,
at that time I was playing drumset in rock and fusion bands, by ear,
no feria for lessons,
or even a complete instrument at that time and I was told that
I had to learn to read music in order to audition at CAL ARTS
even though tabla is an aural/oral instrument

in those days we would buy a record learn it and play the music at gigs,
e.g.,
MAHAVISHNU,
RETURN TO FOREVER
WEATHER REPORT,
GONG,
TONY WILLIAMS LIFETIME,
YES
GENTLE GIANT
BRUFORD, etc., etc.,

Music was also, at that time,
very much an aural/oral tradition.

No commercial transcriptions
dvds,
​youtube, etc.,
for you to check out and play along with.

I remember wearing out records,
you would put the needle on it and it would go straight across.

I bought the same albums many times trying to learn these grooves
by (literally) wearing out the  grooves  on the record, because you would
eventually put first a penny, then a dime, then a nickel so that the needle
wouldn't skip til you had to get a new one

Tabla was very much the same way for me.

LISTEN,
LISTEN,
LISTEN,
learn the compositions
imitate,
and emulate the playing,
the nuance,
the colour and the swing and lilt of the rhythm
which I still do every day,
and every day these men and their amazing spirits
are with me as men, musicians and teachers.

It is only due to their selflessness to impart their knowledge with me and so many others
​which allows me to make music as a living
playing the music I love
with the musicians
I love to play music with
on tabla and/or drumset,
and nothing else musically

Playing THE MUSIC I wish to learn,
with the giants who have come before me

FOREVER INDEBTED TO THE FOLLOWING
they are listed in order of who I studied with when..........
​
GRACIAS A TODOS
cg 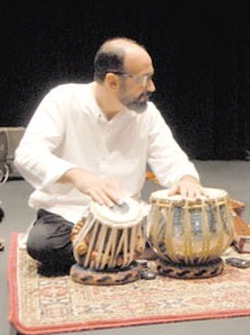