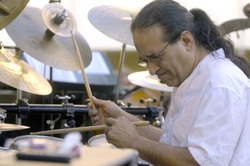 the photo from this story was taken @ LACMA at a performance with
BOBBY BRADFORDS MO'TET
http://www.facebook.com/pages/Bobby-Bradford/108710582487323


INTERVIEW AS TEXT BELOW
Christopher Garcia is one of those musicians who always seems to be on stage when amazing things are happening. I'm not sure he knows how many different groups he's currently playing in, but it's a lot. In addition to teaching all over the world, he's played with a jaw-dropping who's-who of musical luminaries, not the least of which is his gig as drummer with TheGrande Mothers, original members of Frank Zappa's Mothers of Invention.

Although he's a phenomenal drummer, he may be best known as a master of Vedic percussion techniques and, specifically, the tabla. How, then, did a kid from East L.A. wind up being a renowned percussionist, playing tonight with the legendary electric bassist Michael Manring (Bass Player Magazine's Bassist of the Year in 1996) and Yugoslavian guitarist Miroslav Tadic (In 1997, named by Guitar Player magazine as one of the world's most radical and individual guitarists) at the Alvas Showroom in San Pedro.

Christopher:
I met Michael Manring at the Musicians Institute. We had both been asked to perform with a visiting guitarist from Ireland. I played drumset and tabla at that performance, we exchanged info and he called me a couple of months later about a possible trio with Alex De Grassi, which we eventually did. The trio became Demania. We started in 2005 and did a few tours in the U.S., E.U., Mexico and Costa Rica.

Miroslav and I attended Cal Arts in the late 1970s when there were only 480 some students at the school, before there was a jazz department, although a lot of jazz was being performed by students. There are now almost 1,500 students. Same planet, different world.

Sander:
Tell me about the environment there. What was it like?
Christopher:
Cal Arts was very open; the professors, the students, the music, [everything was] very "avanty." Having access to all of that and being able to experience it and perform that music with people who wanted to perform it and wanted to hear it was incredible. You must remember this was pre-Internet, pre-DVD, pre-Blu-Ray, and pre-videos. Nothing was at your fingertips in regards to accessibility as it is now. We experienced this stuff, lived and breathed it. We didn't watch it on YouTube. The problem now is that, with access to information, you have a lot of people who "know about stuff" but never or rarely ever actually live, breathe, perform and experience it as part of their day to day livingness.

Sander:
What inspired you to go to Cal Arts in the first place?
Christopher:
I first heard tabla on a record in 1973. At the time I was playing drums in a rock band in East Los (Angeles, that is). [We covered] Black Sabbath, Zep, King Crimson, Gentle Giant, Cream, Faces and Wishbone Ash. We were taking a break and the bass player's mother said, "Check this out." It was a tabla solo by Alla Rakha, and it blew me away. He played then recited and played. Like I said, [there was] no Internet so I went to this place called a record store and, since I had no idea what a tabla was, looked for music of India.
I was a good student and I received a full scholarship to anywhere I wanted to go to. The only places that I could study tabla as a major were Wesleyan University in Connecticut and the Cal Institute of the Arts in Valencia. At the time I had no idea what CIA was about at all. I went up there, checked it out and, one year later, auditioned for Maestro John Bergamo, who accepted me as a student.
I should add that I was the only undergrad at the time. Everyone else was in the masters' program, and everybody was amazing at some aspect of percussion. Since I had to do everything I could possibly do to keep my head above water, any ego I may have had was thrown out the window immediately. I should also point out that "World Music" and/or "New Age" music did not exist as a category, so telling my parents I wanted to study North Indian tabla was not considered a wise career move.

Sander:
Was it difficult adapting to the oral traditions of Vedic music?
Christopher:
It was interesting. I went from a total oral/aural tradition with rock 'n' roll drumming to the same thing but, this time, with North Indian drumming. My first tabla teacher was Pandit Tarnath Rao, and everything was recited. We learned the syllables first, then the bols, or syllable combinations, then the compositions. We were told not to write them down until we were able to recite them back, and then when we played it back we were told not to look at what we had written.
Everything changes. It gets very deep very fast. We wrote down the syllables, but did not write down the rhythms. The syllables told us what the rhythms would be and, every week, we received new variations and/or compositions.

Sander:
As part of the program, were you required to learn Western percussion notation and repertoire?
Christopher:
Yes, that was a problem for me. I had no interest in it and was unaware that I had to participate in it in order to maintain my scholarship. But as I got into it, it just became more and more fascinating to hear the rhythms and colors of sound that we were able to produce, all under the watchful eyes and ears of John Bergamo, who has an extensive background in jazz, world music and 20th century music.

Sander:
What happened when you graduated?
Christopher:
I did not finish at CIA. I started working playing music, and I went to John Bergamo and asked him for his advice. Do I stay in school and finish or ... He asked me, "What do you want to do? Teach at a university?" I said, "No, I want to play to the best of my very limited abilities." He said, "The only reason you need a degree is if you want to teach at the university level. If you just want to play and not worry about teaching, then you don't need a degree." He also said that no one ever asked to see his degree when he went to a gig.
I should point out that I have taught and lectured at various universities in the U.S. in New York, Iowa and California. I've also taught in Toronto, Vancouver, and throughout Europe, all without a degree. Just lots of practical performance experience.

Sander:
One of your current efforts is with The Grande Mothers. How did you become involved with them?
Christopher:
I was asked to participate in a panel on improvisation in East Los, and Bobby Bradford from Ornette Coleman's band was there. He asked me to come see his ensemble at LACMA, which included Ken Rosser, Don Preston, Michael Vlatkovich, Roberto Miranda, Chuck Manning and William Jeffreys.
On their break, Don Preston walked up to me and asked me if I played drumset. I said yes. He said, "I thought you only played those Indian drums." I said, "No, I play drumset." Then he asked me, "Do you know any Zappa tunes?" And, of course, Bergamo worked with Frank Zappa on a few recordings and concerts and we got the music when John got the music, and I had already arranged some Frank Zappa music for my percussion ensemble. So, I said, "Yeah, I know some tunes. But you need to narrow it down for me a bit," since he had 68 records out at the time.
So Don would give me a title and I would sing it back to him. He then finally asked me if I would like to participate in a reunion of sorts with Napoleon Murphy Brock, Roy Estrada and Bunk Gardner and Ken Rosser and myself. I was told it would be for one concert. Since then we have played in 15 E.U. countries and more than 140 concerts of Frank's music.

Sander:
What does that feel like?
Christopher:
To play with those guys on stage? It is always funny and fun to me. They are the same people just older, still wacky and still very much themselves. We have also played his orchestral music in Norway with a few ensembles.
I should mention that Norway actually pays musicians to play music. So the ensembles rehearse 25 hours a week. We send the music months ahead, get there, do two to three days of rehearsals, put it together and make it happen.

Sander:
What are your thoughts about Alvas Showroom? You've played there quite a bit in a number of different contexts.
Christopher:
Alvas is a great room with a great vibe. If you want to listen to music and be part of the experience you go to Alvas. No one is trying to sell you a drink or food. Everyone is there just for the music, and the sound there is really great, as are the folks that work there.

Sander:
You're also playing there on Sunday, with another group you're a part of.
Christopher: Yes, the Eartha Austria Trio, [which features a] six-string electric violin (he also turns it sideways and comps on it like a guitar), five-string electric cello, and drumset. We play original music and tunes we like.

Sander:
Anything new on the horizon?
Christopher:
I hope that this concert opens doors for Miroslav, Michael and I. They are amazing people and musicians, and this is a new context. I am also writing music for Woodwind Quintet and Mexika, which will be premiered in San Jose and Berkeley in October. Quarteto Nuevo has a bunch of concerts coming up, and the Nima Collective has a new CD coming out. Continuum is working on new stuff, as are The Grande Mothers, so I am very busy and very happy.